Cafe racers are cool looking motorcycles with an exposed engine that can be customized for your specific needs or style. They’re great for short trips around town, but they also have enough power to handle longer roadtrips if you want to take one on vacation.

If you’re interested in buying a cafe racer, here’s what you need to know before making your purchase decision!

A café racer is a motorcycle that has been modified according to the aesthetics of ’60s and ’70s era British bikes while still maintaining some of the features that make it rideable. This class of motorcycle is an homage to the European and British bikes that were modified for speed and handling on the race track and then ridden on the street.

Café racer styling is inspired by British, Italian or American racers from the 1960s and 1970s. This style of motorcycle has been back in vogue with custom bike builders and riders over the past 20 years or so and has inspired a huge following world wide.

The term café racer was derived from the type of bikes seen outside of English style cafés. Many owners would meet up at the café to drink espresso after riding their bike there. These bikes were stripped down racers that had been customized for greater speed and handling on the road. The term ‘café racer’ is still used to define this style of motorcycle.

Café bikes are characterised by minimalist bodywork and an emphasis on speed. They are often, but not necessarily, single cylinder machines with big-bore four-stroke engines or six-cylinder engines. They also feature larger, more lightly sprung wheels than those on standard models, with wide tyres and ‘cushion’ suspension taking place of the more normal hard tail.

Café racers have appeared in many movies during the past 20 or so years, some of which include: The World’s Fastest Indian, Wild Hogs, Harley-Davidson and the Marlboro Man, Pulp Fiction, Coyote Ugly and  The Girl with a Dragon Tattoo.

There are often heated debates about what can or cannot be called a café racer, but in all cases it’s based on personal opinion.

The café racer is a fusion of looks and performance: stripped down, slammed position and highly tuned. The customizations that define the style include:

The café racer is a performance machine that emphasizes acceleration and handling over comfort. On the racetrack, a cafe racer will beat a standard motorcycle into corners, but will leave the standard bike in its dust when that corner ends and the straight commences.

Because many café racers are single cylinder motorcycles, the rider will learn to rev-match his shifting. The increased power and minimal bodywork mean that café racers can keep up with liter class motorcycles on the straights.

Many café racers are fitted with clip-on handlebars or rearsets that allow for closer body positioning on the bike. This reduces wind resistance at high speeds, allowing greater performance.

A café racer motorcycle will have smoother lines with less visible welding or bulky seams. The focus of the design is to reduce drag and pull the rider into an aerodynamic work of art. 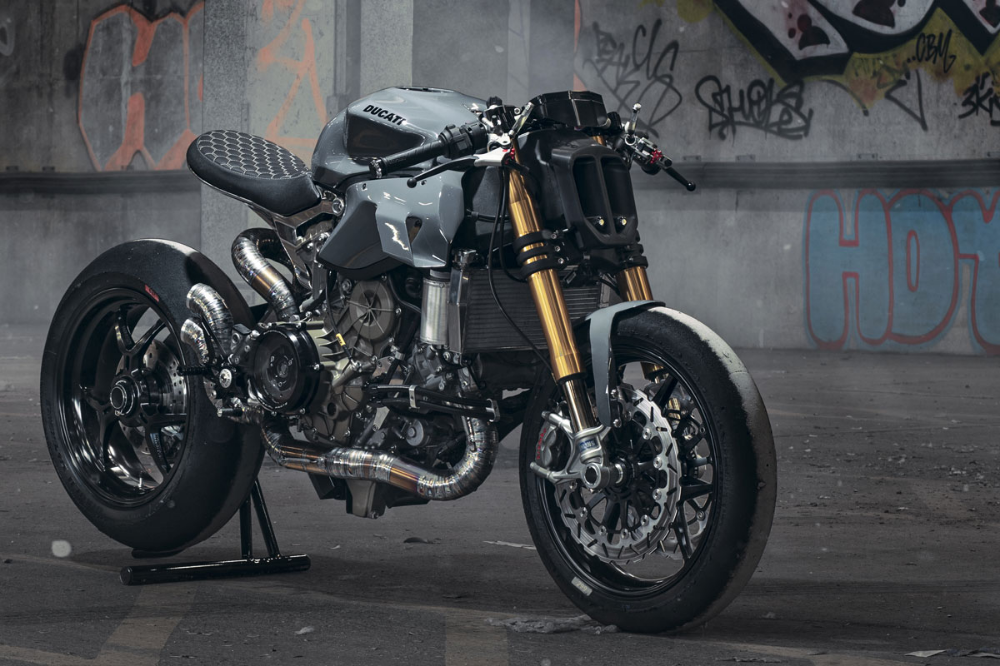 The cafe racer style of motorcycle is not limited to British made bikes anymore. Due to its affordability, availability and popularity it can be applied across the board for any make or model with different degrees of modification- all depending on personal preference.

Modern Cafe Racers are customizable motorcycles that have their roots in the custom motorcycle scene of the early 2000s. These bikes are usually based on Honda CB750’s, Yamaha SR400’s and Triumph Hinkley Bonnevilles among many others but they can also contain features from BMW airheads throughout time periods such as 60’s to 90′.

Brian Waddell is a modern day builder who has created custom motorcycles based on the cafe racer style. He has been featured in bike magazines and his bikes are highly sought after.

The modern cafe racer style generally contains the look of a bobber or street tracker but without the high rise bars.

Some motorcycle manufacturers have embraced the cafe racer style and created their own models to reflect the style. The BMW R nine T is a modern day cafe racer designed by BMW. The stylish café racer features 1170cc’s of torque and 100 horsepower in a beautiful vintage design. Yamaha’s XJR1300 is a modern interpretation of a cafe racer that reflects a style the company has been known for in European markets. The design is sleek and minimalistic with no extraneous pieces on the bike.

Triumph Bonneville motorcycles are one of the most widely used bikes for custom motorcycle builders to create variations of the style. The classic lines of the motorcycle have been used in many creative ways by builders all over the world.

The Honda CB750 is a long time favorite in the custom motorcycle scene. These motorcycles have been a popular platform for builders to create their own variations of the classic style.

In my opinion, this is one of the best examples of a modern day cafe racer created by a well known builder in the custom motorcycle community. Not only does it look sleek and stylish, but the lines speak to a powerful motorcycle that runs well at any speed.

FAQs about what is a cafe racer

1. What makes it a café racer?

Café racers are not known for their comfort, but they are meant for speed. Some café racer motorcycles do have the ability to be comfortable, but they are not built for it.

3. What’s the difference between a scrambler and a café racer?

Café racers and scramblers are two different styles of motorcycles that generally look very similar. Both bikes may contain the same features such as black rims and minimal bodywork, but café racers are designed to be more stylish. Scramblers tend to contain more dirt riding features such as wider front tires, mud guards and higher handlebars.

4. What is the café racer lifestyle?

The café racer lifestyle is a movement that began in Europe in the 1960’s. People would get together on Sundays at their local café to drink coffee and socialize. But many of these people were also motorcycle enthusiasts who would race around the café’s parking lot to practice for upcoming races.

The cafe racer lifestyle has been revived in the modern day and many people who ride a café racer do so because it is tied to a culture they enjoy.

I hope that this blog post has helped you understand what a cafe racer is and its history. If there are any other questions about cafe racer, please feel free to contact me, we will help you with the best answer

Pizza is delicious, but it’s not always easy to know …

Pizza is one of the most popular foods in America, …